Description: It is a simple story about a girl alone on Halloween night. She soon realizes that she is not alone when she begins to get attacked by — yep you guessed it — EMOJIS.

Check it out for yourself below, and be sure to leave us a comment and tell us what you thought!

Alltopstories is all about entertaining videos stories from magic, science, facts, and tales.

Our videos are for fun, knowledge and information about humans, animals, nature and world widely events .

You get often information about myths, traditions, hoaxes or historically interesting events.

Subscribe for weekly videos about the World’s every unique stories and never miss a video again.

:12 this jack-o-lantern has one big top tooth hahah

Lesson: Some things are creative, but offer zero spooks.

Description: This short film written, shot, soundtrack composed, and edited in 48 hours for the 48 Hour Film Project in Nashville, TN.

A musician rushing to get to a gig stumbles upon a teleporting payphone.

This film won: Best Use Of Genre

Character – L.P. Brownstone
Prop – Towel
Line of Dialog – “What was I supposed to say?”
Genre – Fantasy

:23 this dude is late for muddin’ in his truck

1:13 where’s this dude live that there’s a still functional payphone??

1:34 $5 says he just gets run over by that car and it ends after three minutes of his agonized dying

1:55 dude’s too high to even know this is a weird thing

2:34 you can’t cry while eating a sandwich, that’s bad manners

Lesson: Don’t mysteriously appear by cokeheads or you’ll get a bullet through the head.

We love scary stories, we believe scary stories unite us and the best ones make us a little more connected to each other. Crypt collaborates with storytellers around the world to bring the next generation of monster stories to life — for you, for free, everyday. Follow us @CryptTV everywhere and find your #MonsterWithin.

SUBSCRIBE to watch a daily, new short horror film every day from Crypt TV. Our scary movies will leave you shocked, disturbed and creeped out to your core. Crypt TV recently won a Webby for its film, “The Birch,” which has garnered 14 million views (and counting) on Facebook. Crypt TV was also honored as the digital keynote at the 2017 Tribeca Film Festival. Check back daily for more award-winning digital scares!

1:46 what was this written by baptists?

2:05 its funny because men and fat people LITERALLY never get possessed 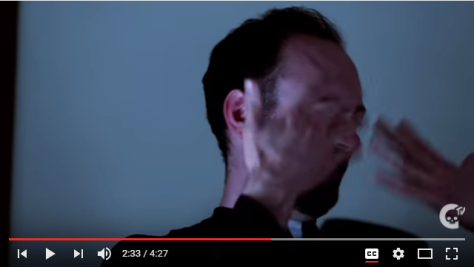